In the second week of March 2015, I went to Japan for a programme called the “Japan-East Asia Network of Exchange for Students and Youths” (JENESYS) 2.0. This programme was announced by Prime Minister Shinzo Abe while he was staying in Jakarta in early 2013 as a continuation of the original JENESYS programme that was executed from 2007 to 2012.

This programme carries the objective of encouraging the promotion of mutual trust and understanding among the Japanese and the larger Asian society, to promote a global understanding of Japanese society, history, cultural diversity, politics and foreign policy, and to convey information on Japan and experience acquired through the program to the general public of the participants home countries through the participants of this project. In other words, it means to encourage possible interests towards Japan among the new generation, to increase the number of visitors to Japan, and to promote universal understanding towards Japanese values and strengths, including the concept of “Cool Japan”, which aims to promote the soft power of Japan, and would eventually lead to the revivification of the economy of Japan.

I was thrilled when I was offered this wonderful opportunity to be able to travel to one of my dream country. I would like to show my gratitude to JOCA (Japanese Overseas Cooperative Association), my Japanese course lecturer, Madame Aisya, and last but not least to the facilitators of the East Asian Studies programme.

The participants consisted of undergraduate students, as well as postgraduates students from universities and institutes all over Malaysia. There were 5 students from the National University of Malaysia (UKM), including me and 2 other students from the same course. We flew to Narita International Airport with Japan Airline, which was fully sponsored by the JENESYS programme.

Besides Malaysia, the programme included delegates from other Southeast Asian countries – being, Thailand, Laos, Cambodia, and the Philippines.

The first thing I would like to mention about the places in Japan is that it is extremely clean. While it is very hard to spot any rubbish anywhere, ironically, you can hardly find a garbage bin on the street. I was told that this is due to the fact that the Japanese are well-disciplined, and most of them will rather keep the rubbish with them than litter on the street.

Besides that, I was amazed that given the fact that being one of the densest country in the world, the traffic here is pretty much under control. This is totally different with the situation in Kuala Lumpur, especially during peak hours. Also, the drivers are mostly polite – one hardly hears any loud and noisy horns blaring.

The food and dining experience

One of the truly captivating aspects of Japan is its food. I noticed the Japanese way of dining is exceptionally unique, that each dish is served in different containers, rather than mixed up. They also eat almost everything with just chopsticks, which was not a problem for me, but proved a challenge for my Malay colleagues. Though they went through some hard time using it, but at least they managed to learn it, and I think it is a good for them to do so, especially to show our respect to the host country. In conjunction with that, I noticed they really paid a lot of attention in serving Halal food, and I must say they did an excellent job in taking care our dietary needs and restrictions. Perhaps this is how the mutual respect works.

I also observed that Japanese food is quite “gentle” in taste, which contrasts with Malaysian; and Malaysians, as they are generally known to be spicy food lovers. The meal are generally mild-tasting, and perhaps this is their secret to longevity. And, I love their custom of saying “Itadakimasu” before eating, and “Gochisosama” after the meal, to express our gratitude for the person who has prepared the meal, and to show thankfulness for an awesome meal, respectively.

Generally, I feel that the Japanese are among the nicest people that I have met. They are very kind, considerate, and always make it easier for the next person. It is their culture to make others’ life easier, including the product they invent. They prefer not to speak harshly, and try their best not to insult others. I take it as a good manner, rather than fake feeling or something else.

I went for a half day student exchange at the Kyushu Institute of Technology on 16th March. Though some of them are unable to speak fluent English, we were still able to instantly form acquaintances with each other through spontaneous interaction. Even though we are far apart geographically, we still stay connected with each other through the internet.

I found the homestay program as the most interesting part of this trip, where I had the opportunity to interact directly with locals. Our group received a warm welcome by our host family in Buzen, a quiet and agricultural-based town in Fukuoka. My ‘host family’ was a middle-aged bachelor, with his cat. We learnt how to bake our homemade pizza and bun, together with all the local villagers here.  Although we have difficulties in communicating due to my poor Japanese proficiency, nonetheless, our common interest towards the Japanese football league, so-called J-League and beer brought us together. We exchanged knowledge as we asked one another about each other’s counties, and I really had a splendid time that night.

The next morning was ultimately the most emotional day out of the whole trip since we had to bid farewell to our host families. Almost everyone shed tears on that day, including me. From my observation, the Japanese are easily attached to people and really do their best at making us feel warm. Now I know for real that “Omotenashi” is what Japan is all about, to entertain guests wholeheartedly, and hospitality.

As we returned to Tokyo from Fukuoka, we had the closing ceremony where each group had to present their findings. And it seemed as it appeared to be my most unforgettable moment here, where I had to accept the challenge to become the emcee for the Malaysian delegation due to a sudden situation. I am naturally shy, and stage fright has haunted me throughout my life. Nevertheless, I managed to perform well with the support of my colleagues, not to mention the encouragement from our mentor. Perhaps he was right, never say never.

March 19th was the last day for us in the marvelous country, and I was happy that I got to make new friends not only from Japan, but from other Southeast Asia country, and even from Malaysia.

From this trip, I have learnt it is vital to follow rules, in order to achieve a better society and understand each other better. For example, the passengers stay silent in commuter, and do not cross the road where the traffic light shows red, even when there is no car passing at that time.

The Japanese are well-known for their punctuality, and I have learnt that being punctual is part of self-discipline. I strongly believe that we Malaysians can make a change if we practice these Japanese values in our daily lives, and what we have to do is spread the good Japanese behavior among our people. 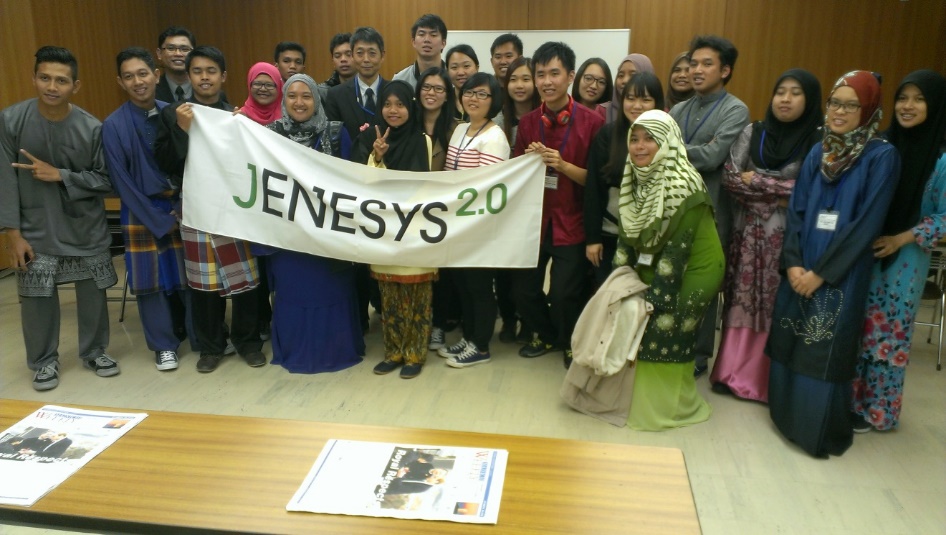 Proudly presenting our traditional costumes during our visit to the Kyushu Institute of Technology. 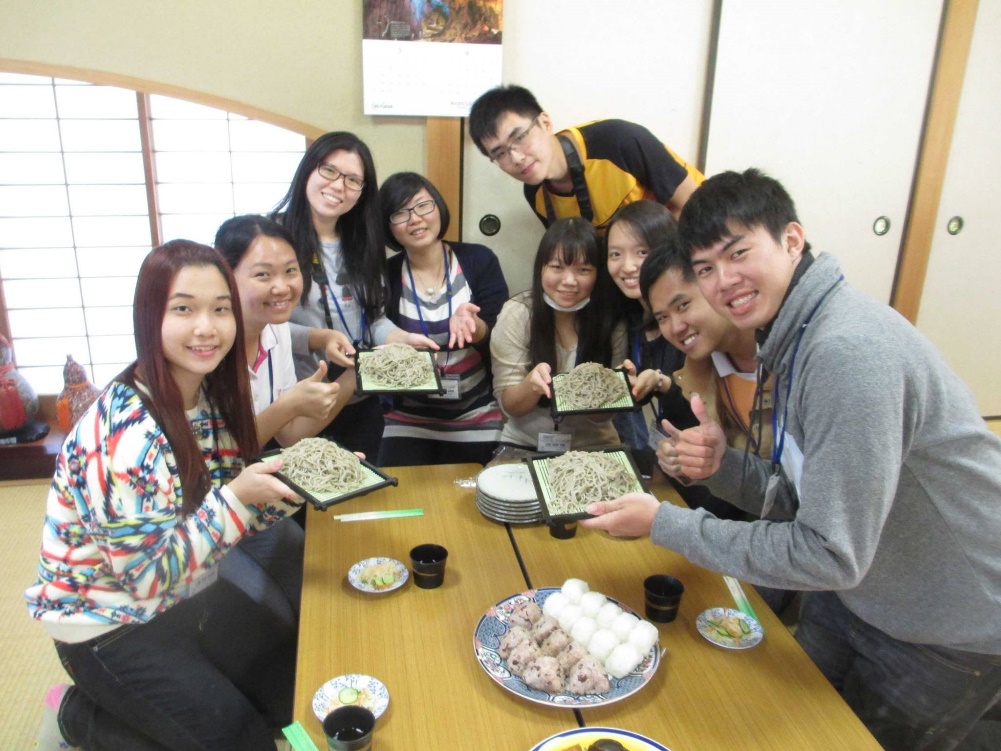 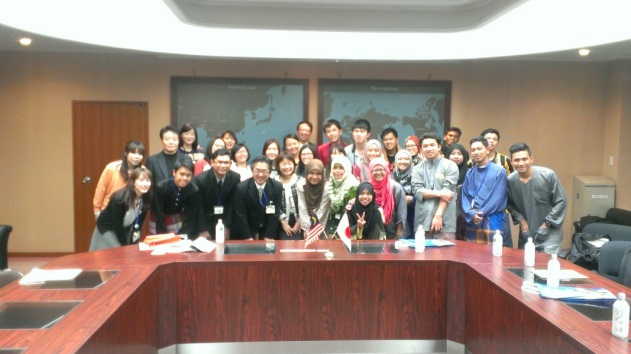 Meet and dance with the Filipino ladies after the closing ceremony